Skip to content
Last summer, my husband and I spent ten idyllic days island hopping in Greece.  Our time there was absolutely blissful… magical even.  But Greek love stories aside, today I’d like to share a few tips and tricks I picked up in the process of planning our Greece vacation and island hopping route. Because it definitely wasn’t as intuitive as I imagined it would be.  I found there to be a general lack of information online regarding everything from navigating the Greek Island ferries to visiting virtually any island outside of Santorini and Mykonos.  So, while I’m certainly not an expert, here are a few words of advice that I would have found helpful during the planning process. 1) Determine which island group(s) you want to visit.  Before visiting Greece, I had absolutely no idea how many Greek Islands there actually were… over 6,000!  227 of which are inhabited.  To assist in narrowing down the choices, the first step is to decide on which island group(s) you want to visit.  The Cyclades are easily the most popular as they’re close to Athens and include the islands of Santorini and Mykonos. However, there’s also a host of other groupings that often go unnoticed.  For instance, the Dodecanese Islands are located near the southwest coast of Turkey and contain the islands of Rhodes and Kos.  Typically, islands falling within the same groupings are located along the same ferry routes and depart from the same mainland port of call. If you’re heading to the Cyclades, you’ll likely depart from Piraeus in Athens.  If you’re on your way to the northern Aegean Islands, you may need to travel to northern Greece and depart from Kavala.
2) Determine your Greek Island hopping route. Once you’ve decided on an island group, you’ll need to determine which islands you’re going to visit.  This will largely be dependent on the ferry route.  The ferry system in Greece is surprisingly difficult to navigate. Basically, certain islands are located along certain standard routes departing from and returning to the Greek mainland.  If you choose three islands located on three different ferry routes, you could be looking at days of travel time trying to get from one ferry route to the next. Certain connections also only operate on certain days of the week.  For instance, we knew that we wanted to visit Sifnos (a lovely quiet Greek Island) and were initially also looking into Santorini, but would have had to stay on Sifnos for 4 nights before a direct ferry to Santorini would have become available. Because of this, we decided to visit Milos instead. This is why it is absolutely essential to book your ferry tickets prior to confirming your accommodation.
3) Book your ferry tickets.  There are several reputable online sites where you can book your ferry tickets in advance.  Personally, I would recommend going through Greeka, Petas, or Danae.  Once you’ve booked tickets to your first island, you can play around with dates and times between that island and other islands along the same route.  If you have time to spare, you can obviously also hop from one route to another.  When you’re booking your tickets, you’ll notice that a variety of different types of ferries are available at varying prices.  The slower the ferry, the lower the price.  We used the high-speed ferries (referred to as speedrunners) and really enjoyed them. Remember that your online booking receipt is not the same as your ticket.  You’ll have to pick these up at your port of call.  Since we left on an early morning ferry, we picked our tickets up in Piraeus the day before.  This worked out well since we were able to familiarize ourselves with the port area in advance.
4) Getting to Piraeus.  The vast majority of island departures and cruises leave from Piraeus, the main port of call in Athens.  To get here, you can either take a taxi or use the metro.  From the city center, a taxi will cost you roughly €15 and from the airport, you can expect to pay around €40.  If you’re traveling via metro, a single trip from the airport or city center will amount to €1.40.  We used the metro and actually found that we preferred it to above-ground transport.  Piraeus is the terminating stop along the green line, you really can’t miss it!
5) Pack Light!  I flew to Greece with only a carry-on and it really and truly turned out to be the best decision ever. Having to lug a large suitcase on and off the metro, through Piraeus, up and down narrow ferry stairwells, and through the island port cities would have been nothing short of a nightmare.  I also took a small backpack and used this for day trips around the islands.  It worked out perfectly!
6) Island Tips. The single largest recommendation I can make regarding actual time spent on the islands is to rent a scooter or quad.  We rented a scooter at a rate of €10 per day and had the time of our lives zipping from one beach to another according to our own itinerary and schedule.  Also, keep in mind that the Greeks really only start to consider eating dinner at around 10 pm.  Expect plenty of late nights and late mornings.  Oh, and also don’t forget to enjoy plenty of souvlaki and ouzo. Olay!

During our trip, we stayed on the islands of Sifnos and Milos. On Sifnos, we stayed at ALK Hotel in Kamares. It was basic, but offered great service and value for money and was really well located with ocean views and within easy walking distance of the beach. Find the latest hotel deals on Sifnos now.

On Milos, we stayed at Tania Milos in Pollonia and absolutely loved it. It’s a seaside villa located right on the ocean with the most incredible breakfast spread you’ve ever seen included in their rate. Find the latest hotel deals on Milos now. 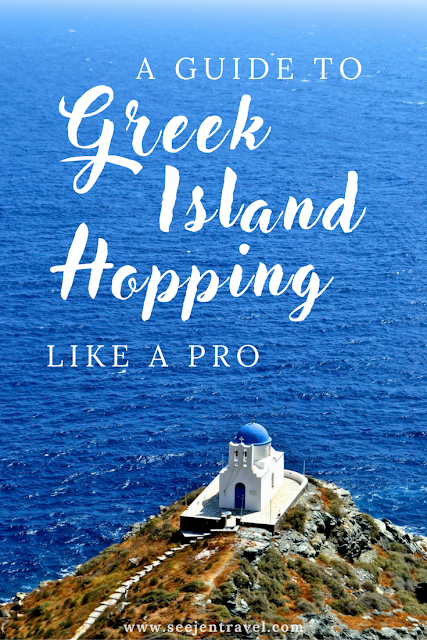